The Brazilian Amazon is the top destination in South America for jungle tourism due to its abundance of mammal, bird, and fish species. Brazil is one of the most populous countries on Earth, with many places to explore. This region, which is home to 60% of Brazil’s Amazon rainforest, is a must-see when you travel to Brazil. We have narrowed down this vast region to just 7 top spots to see while exploring the Brazilian Amazon.

1. THE MEETING OF WATERS
As the Rio Negro flows into the mainstream, you will be amazed at the natural beauty and whirlpool motions. Rio Negro’s color is similar to coffee, and many people say that the Amazon mix looks like cream being poured into it. This is due to differences in current speeds, water temperatures, sediment levels, and other factors. The mixing pot continues for approximately 3.7 miles until the rivers merge into one. This unique sight is only possible in this area. Try to spot freshwater river dolphins, as they often like to hang out here.

2. RUBBER PLANTATION MUSEUM
Visit the Museu do Seringal Vila Paraiso to learn more about Brazil’s history and the rubber industry. The museum was once restored from an original rubber plantation and shows the harsh conditions that slaves had to endure. You can experience the laborious process by trying to tap a rubber tree to extract its latex. Watch as raw latex is heated up to form huge rubber balls, which are then used to make familiar products. You can reach the museum by boat in 20 minutes from Maina Davi. It is open daily, except Mondays, between 8 AM and 4 PM.

3. PARQUE ECOLOGICO JANUARI
Parque Ecologico Januari offers a taste of the Amazon and is easily accessible from the city. The park is located in Rio Negro, about a one-hour boat ride from Manaus. You can see the variety of Amazon wildlife, including colorful birds, howler monkeys, and caiman, that call these flooded forests, wetlands home. The giant Victoria lily pad that grows over the still and shallow waters of the park is a must-see. You will need to see the size in person to be convinced. Some of these enormous green pads can reach 7 feet in diameter. If you are fortunate, you might see the Amazon symbol in bloom. The giant lily pad flower begins as a white flower, then it turns into a lilac shade before dying. The whole process takes just three days.

4. TUPE BEACH
Type beach is home to the Dana tribe. You can visit them to see their native Amazonian life. The locals depend on tourism. They will share traditional songs and dances, offer Q&A sessions, and sell handmade artisan goods. Enjoy the Amazon River’s white sands, calm waters, and embrace the culture. 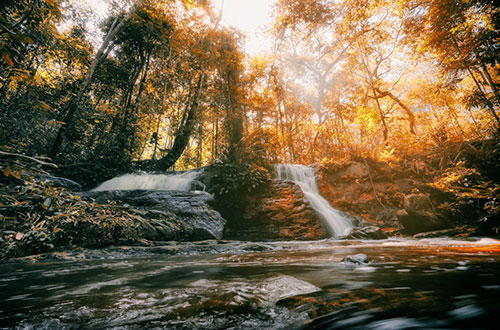 5. JAU NATIONAL PARK
Jau National Park is the largest Brazilian national park and in Latin America. It has thousands of miles of Amazonian Rainforest. Because of its richness in flora, fauna, and endemic species, this park is an important ecological center. The park is open all year, but it is best to visit between July and September when there’s less rainfall. The best time to visit is between November and January when there are many beaches formed along the rivers. This region can be explored best by flying a boat along the waterways. The two largest cities in this area are Novo Airao (located to the south) and Barcelos, which is located to the north. Both cities have simple accommodations and restaurants.

6. INPA SCIENCE AND CENTER
A visit to the Brazilian National Institute for Amazonian Research is a great option for travelers who are on a budget or have limited time. A short taxi ride will take you to the Manaus city center, where you’ll find a park and botanical garden with marked trees and plants. There are much wildlife, including manatees and turtles. The Casa da Ciencia, located on the property, provides a scientific overview of the Amazon ecosystem and discusses major threats to it such as illegal lumber, mining, dams, and urban sprawl.

7. PRESIDENTE FIGUEIREDO
You can get some R&R from the heat and dusty city by spending a few days exploring the small town of Presidente Figueiredo. Also known as the “Land of the Waterfalls”, it is worth taking a few days. The main waterfalls are located approximately two hours from Manaus. Sanctuary Waterfalls is a magical place with its lush surroundings and moss-covered rock formations. Iracema Waterfalls allows you to relax in the pools that are at the bottom of the water cascading. There are many caves in this area, including the Maroaga Cave, where many insects, bats, and lizards call home. Terra da Cachoeiras is nearby and is worth a stop if Presidente Figueiredo is visiting.